Substitute Emergency Levy - What It Means

The March 17th substitute emergency levy, if approved can benefit the schools and their need to fund day-to-day resources without continually coming back to the voters in five year cycles for raising the funds necessary to operate the school day-to-day (General Fund). The new Substitute Levy is initially set at the same level as the previously approved emergency levy from 2015. This means that the value being voted on is equal to the dollar value of the emergency levy it will replace. With new construction, additional funds can be captured by the school.
What is a Substitute Levy?
The Ohio Secretary of State, Jennifer Brunner, notified all boards of election in August 2008 about the new law that created Substitute levies, "On June 24, 2008, Amended Substitute House Bill No. 562 [affecting School District Tax Levies] was signed into law. The new law affects, among other things, two provisions of Revised Code Chapter 5705 relating to school district tax levies. These legislative changes will become effective on September 23, 2008."
She went on to explain the "Enactment of R.C. 5705.199 - "Substitute levy" - R.C.
5705.119(A)- ''R.C. 5705.199, [ ... ] provides for a new tax levy. Under this new provision, the
board of education of a [ ... ] school district may propose at any time to levy a tax for the purpose of providing for the necessary requirements of the school district. Such a levy is required to be proposed as a substitute for all or a portion of one or more existing levies imposed under R.C. 5705.194 to 5705.197, or under R.C. 5705.199, subject to the following requirements:
"(1) In the initial year the levy is in effect, the levy shall be in a specified amount of
money equal to the aggregate annual dollar amount of proceeds derived from the levy or levies, or portion thereof, being substituted.
(2) (2) In each subsequent year the levy is in effect, the levy shall be in a specified amount of money equal to the sum of the following:
(a) The dollar amount of the proceeds derived from the levy in the prior year; and
(b) The dollar amount equal to the product of the total taxable value of all taxable real property in the school district in the then-current year, excluding carryover
property as defined in section 319.301 of the Revised Code, multiplied by the
annual levy, expressed in mills for each one dollar of valuation, that was required to produce the annual dollar amount of the levy under this section in the prior
year; provided, that the amount under division (A)(2)(b) of this section shall not be less than zero."
"The resolution proposing the substitute levy shall specify the annual dollar amount the levy is to produce in its initial year; the first calendar year in which the levy will be due; and the term of the levy expressed in years, which may be any number not exceeding ten, or for a
continuing period of time.[ ... ] If two or more existing levies are to be included in a single
substitute levy, but are not scheduled to expire in the same year, the resolution shall specify
that the existing levies to be substituted shall not be levied after the year preceding the year in which the substitute levy is first imposed."
What Does All This Mean?
The Substitute Levy will be set dollar-for-dollar at the initial value set for the emergency levy-approximately $18.5 million dollars. So for the first year, the schools will set the initial value of the substitute levy for approximately $18.5 million. Then if there is any new construction - homes or businesses within the school district, that new construction will bring additional income into the school district. New construction allows the $18.5 million value to grow.
What Does That Look Like? 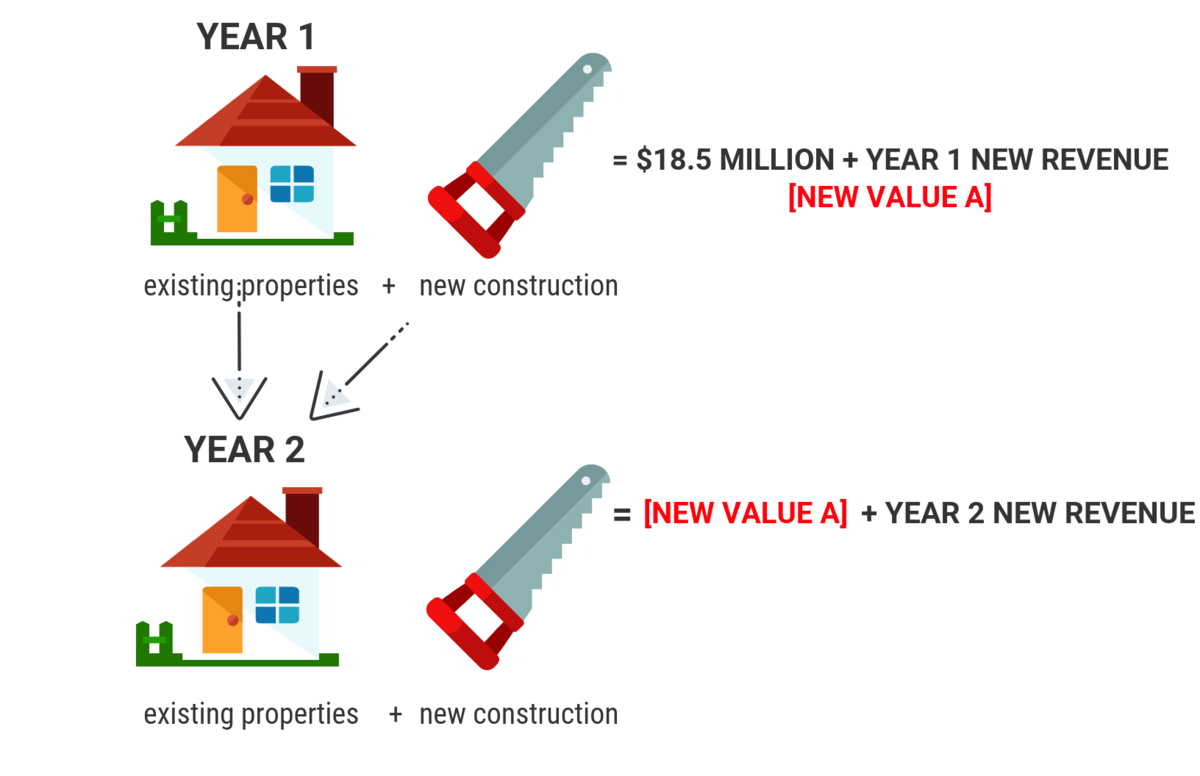 In year 3 the cycle repeats - previous year tax revenues become the base for the next year. These revenues are derived from the CURRENT year existing properties. Any new construction brings in additional income!
Following the above graphic, in year one, the start value is $18.5 million for all the existing property owners. Then as new homes and businesses are built in the Beavercreek City School District, they will be assessed at the same rate of taxation as the existing home owners. This means that new homes and businesses will add additional taxes to the amount being collected and the base value for the next year will grow above the $18.5 million. The (year two) existing property owners include all the new construction from year one. The base amount of money that the Substitute Levy will collect in year two is the total of the initial $18.5 million PLUS new money collected from the new business/homes built in year one [New Value "A"]. Added to this base value [New Value "A"], is taxes that will be collected from new homes and business that are constructed in year two.